Why Do Leicester City Play In Blue & White?

​Leicester City supporters young and old would be forgiven for thinking the Club's traditional colours of blue and white have been in place for the entirety of 136 years of history.

​However, there have been clues over recent seasons to the contrary, usually in the form of away shirts, designed with several nods to bygone eras from the Club's rich heritage.

​Formed, initially as Leicester Fosse, in 1884 by the members of a bible class at the now-demolished Emanuel Chapel on New Park Street, the Club was naturally quite different in its formative years.

Leicester Fosse's first-ever match, featuring a team with an average age of 16, was a 5-0 victory over Syston Fosse and included a shirt which would return to prominence 119 years later.

Unfortunately, despite the wealth of material in the Club's archives, there are no pictures of the kits which Leicester Fosse adorned in the years between 1884 and 1886.
​
However, in 2003, using drawings and first-hand accounts, the Club made the decision to mark the year of their 120th anniversary with an away kit which replicated that maiden shirt design.
:: click here to check out City's changing kits through the years ::

An all black kit, featuring a striking Cambridge blue sash, running from the right shoulder down to the left hip on the shirt, was a modern twist on the Club's first-ever home strip.

During Fosse's time adorning these colours, they played at Victoria Park, but a move to the Belgrave Road Cycle & Cricket Ground was curtailed when the Leicester Tigers Rugby Club outbid them in 1888.

Indeed, the presence of Leicester Tigers on the local sporting scene, in a time when association football was seldom viewed as a public spectacle, may have played a key role in the decisions taken by the Club.

It is speculated that Leicester Fosse's continual switch in primary colours could, at least in part, be put down to the Club's desire to always be easily distinguishable from their rugby counterparts.
​
As a result, in 1886, two years after the Club's formation, Leicester Fosse began to run out onto the field in an entirely new - and decidedly unique - set of colours.

It was around this time that Leicester Fosse elected to wear shirts with chocolate brown and Cambridge blue halves, with white shorts, or as they were called at the time, 'knickers', with dark 'stockings'.

This is a version of Leicester's colours which has never been returned to or replicated, even in the era of more elaborate away shirt designs, but it nonetheless coincided with several key landmarks.

In 1890, the kit's final year of use, Fosse defeated Coalville in the Leicestershire County Cup final in Loughborough and, the following season, they were introduced to the FA Cup for the first-ever time.

For the next nine years, running until 1899, Leicester wore white shirts with black shorts and, for reasons difficult to explain definitively, some players had Leicester Town's coat of arms sewn into the fabric.
​
The white shirts were also the first to be adorned at Filbert Street in 1891, before spending the next 111 years there, as the 'Fossils' embarked on their first full season in the Midland League.

A major moment in the Club’s history arrived in 1894, meanwhile, as a AGM granted Fosse with enough votes to earn election to the recently-formed Division Two within the Football League pyramid.

By 1899, however, the Club had taken the notable decision to play in the Cambridge blue and white palette which is vaguely recognisable today, but it would take Leicester Fosse 14 years to earn promotion to the top tier.

Their spell in 'light' blue and white lasted just two seasons, though, as the Club changed its colours again, to dark blue shirts, with light blue sleeves, white shorts and dark socks in the 1901/02 season.

From 1902 until 1919, a year after the conclusion of the First World War, Fosse were back in blue - a darker shade than previously - and white as players not in conflict represented the Club in wartime regional competitions.
​
By the time football began to get back in order, the Club was in a dire financial situation and, in the same year Leicester regained city status, the Club was registered as Leicester City Football Club in 1919. 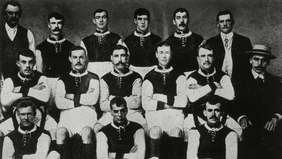 Their inaugural season as 'City' saw the team run out with blue and white vertical stripes across the home shirt, alongside white shorts and blue socks, but this design would remain for just three years.

Thus, finally, after 38 years of existence, Leicester City returned to the blue and white strips which remain in place in the present day, later finishing within one point of winning the top title in 1929.

In blue and white, Leicester City have won the second tier title a record seven times, been to four FA Cup finals, won the League Cup three times, and competed in four European campaigns, most notably in the 2016/17 UEFA Champions League, when the Club reached the quarter-finals.

They were in all blue, meanwhile, on the day they ended a 132-year wait to be crowned as English champions in 2016, with Wes Morgan and manager Claudio Ranieri lifting the Premier League trophy.
​
Throughout that passage of time, on the other hand, the Club has been distinguished by an array of crests, ranging from the fox's head within a shield for the 1949 FA Cup Final to the one used today. 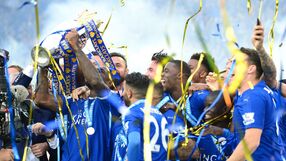 Between 1949 and 1983, a crest featuring a sideways fox's head, replicated by the Club's retail brand Fox & Crop was used, while the 'running fox' emblem featured on shirts until 1992.

Across the Club's entire history, Leicester City have also appeared in a wide variety of away shirts, with colours ranging from shades of white, green, yellow, red, gold, black and, this season, pink.

Indeed, for one season only, in 1972/73, the Club did deviate from their traditional home colours, electing to wear an all-white kit for one season, inspired by Spanish giants Real Madrid.

Players and fans alike, though, rebelled against the decision, making it the only year since 1922 in which Leicester's football team wore anything other than a blue home shirt. 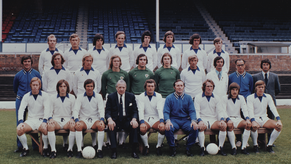 Despite this, there have been occasions when outside influences have forced the Club to briefly break from tradition, largely due to the growing demand to broadcast fixtures on television.

Before the advent of colour TVs, FA Cup Finals were broadcast in black and white, but when two teams in dark colours confronted each other in the showpiece event, measures had to be taken.

In the days leading up to 1963 final defeat by Manchester United, for instance, a coin toss decided that Leicester would have to wear white shirts, to avoid a clash with United's red shirts.

Those occasions are rare in City's history, however, meaning the Club's association with its current colour palette, especially following 2016, is one recognised by fans of all teams around the world.
Original story posted by and reproduced with thanks from lcfc.com