Claudio Ranieri - The man who won us The Premier League 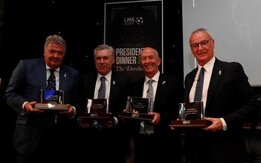 The League Managers Association tonight hosted the LMA President’s Dinner 2017, with England Manager and LMA President Gareth Southgate, at The Dorchester in London.

The event brought together 350 esteemed guests to induct six exceptional managers into the LMA’s Hall of Fame - 1000 Club as well as to raise funds for the LMA's charity In The Game.

LMA members Carlo Ancelotti, Tony Pulis, Claudio Ranieri and John Toshack MBE were formally inducted during the evening, whilst Rafa Benitez and Sven-Göran Eriksson, who were both unable to attend due to football commitments, were inducted in absentia.

On the career achievements of the guests of honour, Gareth Southgate said: “It was a privilege to be able to welcome these highly respected managers, their families and friends to the LMA President’s Dinner tonight and recognise their remarkable accomplishments in football.

“The significance of reaching 1000 games in football management at the elite level cannot be understated and it is clear that their dedication to the profession has enabled them all to be successful in many different ways. They are an example for all young managers, demonstrating what can be achieved in the game through hard work and dedication."

Fellow LMA 1000 Club and LMA Hall of Fame member Sir Alex Ferguson said: “Congratulations to Carlo, Rafa, Sven, Tony, Claudio and John on surpassing this extraordinary milestone in football management. They join a select group of 24 managers, some of the most decorated and experienced individuals in the game, in a very special club.

“It takes decades of sacrifice, resilience and talent to build such marvellous careers in the game and each of these managers has experienced every emotion and every challenge that comes with the job, and achieved a great deal.

“I’m delighted to welcome them into the LMA 1000 Club and wish them all further success in their managerial careers.”
​LMA