Four times the bridesmaid but never the bride

It’s a triumph which means the Club has now lifted all of English football’s most prestigious honours, adding to a single Premier League title and three League Cup victories. LCFC.COM ​

The Road to Wembley

Mads Bech Sorensen gave Leicester their only real fright in their FA Cup run when he fired Brentford into a half-time lead. But Cengiz Under's equaliser immediately after the break set up the Foxes' recovery. Youri Tielemans' penalty put them ahead and James Maddison wrapped up the comeback with 19 minutes left.

Iheanacho 94’
​
Kelechi Iheanacho was at the start of his hot streak when he grabbed a 90th-minute winner against the Seagulls. The game looked certain to head into extra-time with neither side able to break the deadlock. But Brighton were undone by a quick short corner in stoppage time and Iheanacho headed in from close range.

Two goals from Iheanacho and one from Tielemans dispatched United to put the Foxes into the last four for the first time in 39 years. Fred's awful backpass gifted Iheanacho the opener and, after Mason Greenwood had levelled, Tielemans restored Leicester's advantage. Iheanacho wrapped up the victory with a simple header 12 minutes from the end.

The Foxes reached their first FA Cup final for 52 years – since they lost 1-0 to Manchester City – when they overcame Southampton at Wembley last month. Iheanacho's goal 10 minutes after half-time beat the Saints in front of 4,000 supporters as part of a pilot scheme as football began the slow return of fans amid the coronavirus pandemic. Leicester will now aim to avoid a fifth FA Cup final defeat when they face Chelsea on Saturday. 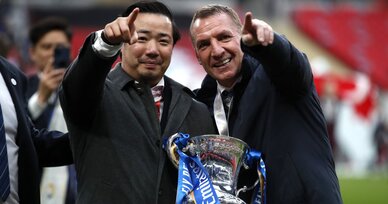 Their goal was a firecracker and it was supplied on 63 minutes by Youri Tielemans. Up until then, it had been an extremely cagey game but the midfielder blew the doors off after seeing a Reece James clearance hit Ayoze Pérez – possibly on the arm – and Luke Thomas roll the ball into him.

Tielemans put everything into the shot. He had scored 16 times for Leicester previously but this one will live forever.
​
The connection was perfect and it flew into the top corner beyond Kepa Arrizabalaga, Chelsea’s cup goalkeeper, who stretched for the ball with his wrong hand.

​At last, the gloves were off and we had a final. The pantomime villain of the piece was Ben Chilwell, the one-time Leicester full-back, who Chelsea brought on as a 67th minute substitute. The Leicester fans, who formed a noisy part of a 21,000 crowd, jeered his every touch.

Chilwell thought he had forced an equaliser not once but twice. First, he rose to head towards the bottom corner only for Kasper Schmeichel to throw out a hand and claw the ball to safety. And, after Schmeichel had brilliantly repelled a Mason Mount half-volley, we had the heart-stopping late controversy.
Chilwell burst up the left to meet a Thiago Silva pass and prod across goal and it was then fate intervened. Calgar Soyuncu swiped at the clearance and sent the ball straight at Wes Morgan, the Leicester stalwart who had just entered as a substitute for his first action since last December. It hit Morgan and went in.

And yet VAR was not happy. The technology flagged up an offside against Chilwell and Leicester, after five nerve-shredding minutes of stoppage time, could celebrate wildly.
For Schmeichel, who grew up watching his father, Peter, win this competition with Manchester United and who lifted the trophy together with Morgan, it was a dream fulfilled. But the same could be said of all of Leicester’s heroes, from Thomas, so composed at 19 years old, to Jamie Vardy, who never stopped running at 34. Wesley Fofana was a rock in central defence. 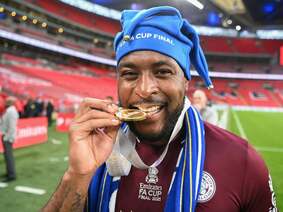 For Rodgers, it was a first trophy in English football after seven in Scotland with Celtic and the records show that he has won each of his seven finals as a manager, including the Championship play-off with Swansea in 2011. His players threw him into the air during the delirious post-match scenes and he will now want to close out a stunning season with a Champions League finish. Next up for his team is Chelsea at Stamford Bridge on Tuesday – another seismic game.

Chelsea knew only misery. When they were soundly beaten by Leicester at the King Power Stadium in January, it was the prompt for them to replace Frank Lampard with Thomas Tuchel. Pretty much everything has gone perfectly for the new broom, although last Wednesday’s home defeat to Arsenal was a blip.

This was a first major setback and the hope from Tuchel’s side has to be that his team can recover in the rematch against Leicester to ensure they finish in the Premier League’s top four. The margins for error are zero. Beyond that, of course, is the Champions League final against Manchester City. The success or failure of the season rests on a knife-edge.
​
The atmosphere pulsed throughout with this the biggest spectator event in the United Kingdom for 14 long months, although it was jarring in the extreme to hear boos mixing with cheers when the players took a pre-match knee to support the fight against racism.
For long spells, the fear of making an error weighed heavily and how the spectacle suffered. There was not much of an appetite for taking on an opponent or risking the ball.

​Tuchel played James on the right of his defensive three, with César Azpilicueta outside of him, mainly because he needed the youngster’s pace against Vardy. The game’s first chance followed a Tielemans pass and a Timothy Castagne cross which Vardy met with a first-time shot, having held his run superbly. James blocked.

​Mount flickered in the first half, sparking the best of a limited crop of chances for Chelsea with a cross on the half hour that led to Silva dinking back towards the far post. Timo Werner stretched for the header and made the faintest of connections only to take the ball away from Azpilicueta, who was better placed behind him. It was another one of those days for Werner in front of goal. Tielemans would show him how and, as Leicester cavorted about at the end, the Chelsea players stared blankly into the distance. They must use the pain as a spur.
The Guardian

Calvyn
Wonderful stuff! I had a tear in my eye at the end and I'm not even a Leicester fan.A memorable second half. A fabulous winner, two world class saves and a bit of VAR pedantry. One of the best cup finals for many years. No disrespect to Chelsea, but it would have meant less to them had they won today. Well played, Leicester.

As seen by a Leicester Fan

Chelsea came at city in the second half, and to be fair, dominated large portions of it, but then with the team/squad they have, that’s no surprise, but then on 63 minutes and the ball at Tielmans feet, he unleashed a thunderbolt of a shot, that hit the back of the net like a missile .

The goal sent us in to raptures and I was simply thinking OMG, as tears rolled down my face. The goal certainly lifted Chelsea into another gear, although I’m not convinced they weren’t in top already. Wave after wave of Chelsea attacking football, left me dry throated and gasping for air, as I wondered could we hang on.

With Chelsea and their star studded forwards I was nervous to say the least, and with Kasper pulling off two or three world class saves, was our name on the cup, well with minutes to go, with the clock seemingly stopped,

Chillwell of all players scored an equaliser, and my heart stopped and my dream in the slide, but then from know where, the tannoy said they were checking for possible off side, which we never envisioned as it was at the opposite end to where we were, but from disappointment to cry’s of joy, as the goal was disallowed.

The final whistle went, and I broke into tears, this was unbelievable and something I dreamed of, but never thought I’d see.
​
This was as I said earlier, an unbelievable day, and an amazing result, made for me to have my dad, brother and Pam with me,
My mom today was Tielmans, unbelievable performance and goal
​ 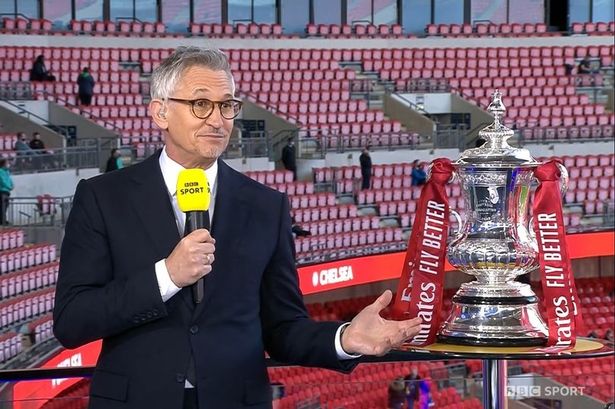 ​BBC Sport's coverage of the FA Cup final was met with 124 official complaints over alleged bias in favour of Leicester City.

Gary Lineker hosted the Wembley broadcast as Youri Tielemans' stunning long-range effort fired the Foxes to a 1-0 victory over Chelsea earlier this month.

The Match of the Day presenter celebrated the winner raucously and was clearly fighting back tears at full-time as his boyhood club won the FA Cup for the first time in their history. Lineker's heartfelt performance in the studio was not universally appreciated, however, and the BBC received 124 complaints from fans unhappy with the broadcast.

That's according to The Sun , although it is unclear which particular moments were the source of the grievances. As well as celebrating Leicester's goal, Lineker opened up on the significance of the cup win during an emotional outpouring after the match.

"Unbelievable, fantastic scenes," he said. "Extraordinary for all the Leicester supporters here watching this, it’s been such a long time. "It’s the one they’ve wanted, they won the title just a few years ago of course – that was the biggest miracle of all."

​Lineker momentarily struggled to maintain his composure before adding: "My dad went to all four finals, I wish he was still here, I hope he’s watching somewhere, I hope so…
"I was here 52 years ago, not exactly the same stadium. I had a different emotion on that occasion and I thought I was going to suffer a terrible fate again, but VAR saved the day for Leicester." Leicester had a major scare in the closing stages but Ben Chilwell's late equaliser was chalked off for offside following a VAR check.

​The FA Cup final was an emotionally-charged event for everyone associated with Leicester. The club's owner, Aiyawatt ‘Top’ Srivaddhanaprabha, took charge after his father, Vichai, tragically died in a helicopter crash in 2018, and celebrated with his players and manager Brendan Rodgers on the pitch. "And a word on the owners," said Lineker." A massively emotional moment for him – his father was lost obviously in that helicopter crash three years ago. "He’s come in, he’s carried on the great work of his father. He’ll be remembered today by all the Leicester fans, Vichai."

​Lineker was joined in the studio by former England internationals Ian Wright, Alan Shearer and Ashley Cole - who played for Chelsea. Guy Mowbray was on lead commentary duty with former Tottenham and Three Lions midfielder Jermaine Jenas in the supporting role. Ahead of the match, may fans who would otherwise have been neutral may have sided with Leicester due to the European Super League debacle. Chelsea were one of the 12 founding members of the controversial breakaway league but performed a drastic U-turn following mass backlash to the proposals.