Premier League great escapes
Which one did the BBC website users vote the best?

With the Premier League season on hold, the fight to avoid relegation must wait. With Norwich six points from safety at the bottom, boss Daniel Farke had already said the Canaries need a "miracle" to stay up. We're yet to find out when - or if - Norwich will resume their battle to beat the drop, but they will be able to take inspiration from previous survival acts.
​
We took a look back at the Premier League's great escapes and asked you to vote for which one was the best. Here are the results - and you can still read about the seven contenders below.

Which is the greatest Premier League escape? 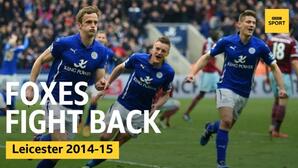 Leicester's extraordinary title win is even more remarkable when you consider that 29 games into the previous season, they were seven points from safety at the bottom. And that season was also bonkers.

With Nigel Pearson battling to avoid an immediate return to the Championship, the pressure seemed to show in February as he was involved in a bizarre touchline clash with Crystal Palace midfielder James McArthur. The club denied rumours that Pearson was sacked and swiftly reinstated, yet the Foxes were still bottom in April.

But a 2-1 home win over West Ham sparked a run of 22 points from 27, which saw Leicester clinch survival with a game to go and ultimately finish 14th.The only blip during the run-in was a defeat at champions Chelsea, when Pearson walked out of the post-match news conference after asking a reporter if he was an ostrich.
​ 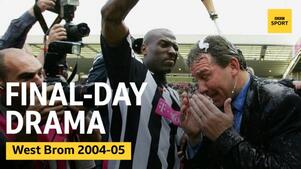 ​West Brom became the first Premier League side to avoid relegation having been bottom on Christmas Day.

The ultimate nail-biter. This is the only Premier League campaign where all three relegation places were decided on the final day. And never mind being bottom at Christmas, West Brom had slipped back there before the last game - and remained bottom for most of the final day. The Baggies had to beat Portsmouth and hope their three relegation rivals all failed to win.

Norwich were thumped by Fulham and although Southampton took the lead against Manchester United, the Red Devils fought back. So, heading into the closing stages, it was between West Brom and Crystal Palace.

The Baggies won 2-0, although celebrations for the second goal were muted as Palace had just come from behind to lead at Charlton. With eight minutes left, Charlton levelled it up again. Then with their game over, West Brom players and staff waited on the touchline for Palace's final score: 2-2 - cue pandemonium at The Hawthorns.
​ 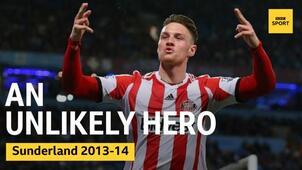 Between April and May 2014, Sunderland won four straight Premier League games – for the first time since December 2000.

Boss Gus Poyet said Sunderland needed "a miracle" - and it took an unlikely hero to spark this rescue mission. One point from 24 left the Black Cats seven points adrift with six games left and they still had to visit Manchester City, Chelsea and Manchester United.

Enter Connor Wickham, who had just returned after spending most of the season on loan in the Championship. The striker scored five in three as Sunderland drew 2-2 at City before beating Chelsea and Cardiff.
​
Seb Larsson's acrobatic volley secured victory at Old Trafford and a 2-0 win over West Brom saw Sunderland stay up with a game to spare.
​ 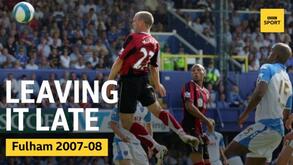 The Cottagers twice came back from the brink in 2008. Derby went down with what remains the Premier League's lowest points total (11) and with 20 minutes left at Manchester City, Fulham were about to join them.

Roy Hodgson's men were 2-0 down and set to go six points adrift with two games left. Surely it was over?
​
Diomansy Kamara had other ideas. Out of nothing, the Senegalese striker pulled one back. Then Danny Murphy equalised before Kamara lashed in a stoppage-time winner.
Victory over Birmingham put Fulham's fate in their own hands but with the Blues and Reading both winning on the final day, it was a tense afternoon at Portsmouth.
Fourteen minutes from time, Murphy headed home from a free-kick to keep Fulham up on goal difference.
​ 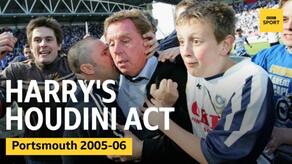 Portsmouth picked up more points in their final 10 league games (20) than during their first 28 (18).

Sometimes it just takes one goal to turn things around. With 10 games left, Pompey were eight points from safety when they hosted Manchester City.

They were set to go nine games without a win when City cleared a corner towards Pedro Mendes, who slammed a stoppage-time winner into the top corner.

Portsmouth were a side transformed. Having scored four goals in their previous 10 games, they scored seven in their next two, winning at West Ham and Fulham.
​
Further victories over Middlesbrough, Sunderland and Wigan saw them secure safety with a game to spare, having claimed 20 points from a possible 27. 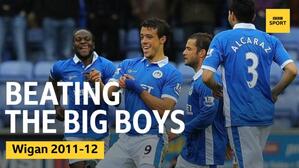 Wigan picked up more points in their last nine games (21) than any other side - even champions Manchester City (20).

With nine games left, Wigan were only three points from safety. But this survival act was about the volume of points and the quality of the opposition.

After one win in 14, check out Wigan's next three away games - Liverpool, Chelsea, Arsenal. They also had to face leaders Manchester United. It was all hands up to the pump - and Roberto Martinez's side had eight different scorers in their last nine games.
​
The Latics gave themselves hope with a first-ever win at Anfield before Shaun Maloney's goal gave them a first-ever win over United. They followed that up with a first-ever win at Arsenal.
And despite losing at Fulham, Wigan sealed the deal in style, winning their last three games to finish 15th. 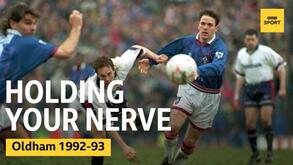 Oldham were one of the Premier League's founder members but to survive for season two they had to pull off some heroics in the final week.

The Latics faced Aston Villa, who were still in the title race, knowing they had to win their last three games - and hope Crystal Palace gained no more than a point from their last two.

But Joe Royle's side won 1-0 at Villa before beating Liverpool 3-2 in midweek. That night Palace drew at Manchester City so it went down to the final day.
​
Palace fell behind at Arsenal while the Latics romped into a 4-1 lead over Southampton. And although the Saints made it 4-3 to set up a nervy finish, Oldham held on to stay up on goal difference.

Reproduced with thanks to BBC Sport