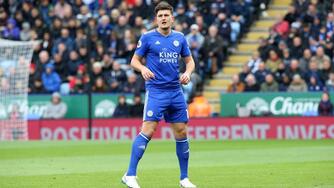 Is Harry Maguire On His Way Out To Manchester United?

Every day there seems to be more possibilities that Harry Maguire will leave Leicester in the summer to join Manchester United. It is not a surprise that the England international is on the shopping list of Ole Gunnar Solskjaer as Manchester United desperately need a centre back for the new season.

Brendan Rodgers has already made it very clear that he would like Maguire to stay at Leicester. The former Liverpool manager has said that although he understands the player ambitions, he believes that The Foxes are ready to take their game to the next level.

Jose Mourinho has also tried and failed in the last summer to land the former Hull defender. After a horrendous season, Manchester United are willing to spend big as they need to close the gap on Manchester City and Tottenham at the top of the Premier League.

Leicester can only do so much to retain their player and eventually they would have to desist in the presence of a strong offer from United. Considering that, Rodgers has already started to look for a replacement if he loses Maguire to Manchester United.

According to a leading betting offers comparison site, Rodgers has identified in James Tarkowski as the right replacement for the role. The Burnley defender has already played under Gareth Southgate with Maguire in the England squad. He has performed very well since he moved to Turf Moor in 2016 from Brentford.

Rodgers has sent an indirect message to Maguire before the last match against Chelsea. The former Celtic manager said that he will keep developing the squad ahead of next season. He told The Mirror that Harry Maguire is a fantastic centre-half and that it is not surprising to see such interest in him. He also added though that he can still improve significantly. The fact that he has the age on his side is a great thing.

Maguire has great pace and is a defender that likes to head the ball. Rodgers said that he and his team have identified specific areas that he can work on this summer that is without major tournaments. Rodgers added that he is convinced that he can develop further.

The message from Leicester is clear. If Manchester United want to bring Maguire to Old Trafford they would have to break the bank. In the last summer, Mourinho was disappointed after the Reds Devils failed to land players of the calibre of Maguire, Toby Alderweireld, Milan Skriniar and Diego Godin. As a result, they had to do with the likes of Chris Smalling and Phil Jones and the outcome was poor.

The Foxes are continuing to improve the squad and their ambition is to be a top 6 club. Selling a top player like Maguire is not in their plans unless they will receive an offer e that cannot be refused, like the one Manchester City made for Riyad Mahrez.

After the disappointing end of their Premier League campaign, it is expected that Manchester United boss Ole Gunnar Solskjaer will try to close his summer business very quickly. The Norwegian has said that this is it's clear intention.
16.05.19 12mth