For most English Premier League players, the rise to the top is fairly well-trodden.

They will get picked up at an early age by a professional club and excel in their academy, and after that they will get their chance in the first team eventually, having gone out on loan a few times. For those who are released by an academy before getting a chance to prove themselves, they are often picked up by another team. Harry Kane is a good example as he was released by Arsenal at the age of nine, before being picked up by Tottenham two years later.

This story, however, is of a player who took the hit of rejection at a much later age, which for most means the end of the road where a career at the very top is concerned. Jamie Vardy, perhaps the unlikeliest superstar the Premier League has ever seen, is that player.

Rejected at 16 - After being rejected by Sheffield Wednesday, Vardy found a home with Stocksbridge Park Steels, where he had spent seven years scoring plenty of goals, before eventually catching the eye of Halifax Town at the ripe age of 23 – older than the age at which Wayne Rooney lifted the Champions League trophy. 23 is also the age where most footballers destined for the top would have already made their England debut. Vardy, however, was just happy to be getting paid to play football.

After seven years of plugging away for Stocksbridge Park Steels, who are planning his rise to stardom from there onwards was rapid, and it could be years before we see anything like it again. Vardy took his chance with aplomb in the Northern Premier League, scoring 23 goals in 33 games in his first season at Halifax, and starting the next season by scoring three in four games.
​
That was enough proof for Fleetwood to go and buy Vardy taking him the highest level of the National League System. He would then go onto score 31 goals in 36 games for Fleetwood and prove just how deadly he was in front of goal.

If the story stopped there, it would have been a wonderful one. From playing for Stockbridge at the age of 23 to being in the Championship at the age of 25 was a phenomenal achievement. But it was no surprise that Vardy found the change in level hard to cope with at first.
​
With just four goals in 26 Championship games, he struggled to score as freely as he did in the lower levels. Those struggles wouldn’t last for long though, as Leicester kept the faith. Duly, he rewarded them by firing 16 goals in the 2013/14 Championship season to help the club win promotion. 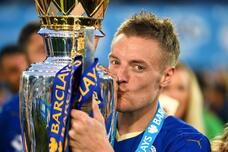 Misfit, Reject… Champion
​
If Vardy’s career up until that point was a miracle, the first season in the Premier League would provide another one. With nine games to play the club were seven points from safety, with bookmakers gladly paying out for their relegation. Astonishingly Leicester won seven of those nine remaining games, and managed to finish in 14th place – a whole six points above the relegation zone.

Vardy scored in three of those wins, setting him up nicely for a 2015/16 season that promised another relegation fight for Leicester. Bookmakers such as Marathonbet gave notoriously generous odds for Leicester winning the title, with potential payouts of thousands from, perhaps, as little as £1.

At the start of the 2015/16 season, Jamie Vardy was still not very well known to the Premier League. Just five goals in the previous season didn’t warrant much attention, and practically no one felt any reason to use him in a fantasy football team.

Only those who have spent the last four years under a rock, with their fingers in their ears and their eyes shut, will be unable to recall what happened next. Leicester won the title by a ten-point margin, thanks much to Vardy going into full-on ‘beast mode’, scoring in 11 games in a row, and netting 24 goals in 36 games, averaging one goal every 130 minutes.
​
That early season form earned him an England call up vs Ireland in June 2015 – at the age of 28, just five years after being a Stocksbridge Park Steels player. As of October 2019, he has scored seven times in his 26 international appearances, with 13 on those appearances being undertaken from the bench. He would also go on to prove that he was no one-season wonder, scoring 51 Premier League goals in the following three seasons and starting the current season in truly evergreen form. 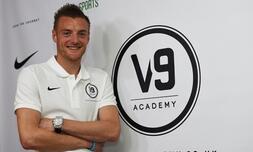 The Next Jamie Vardy
The rise of Jamie Vardy has provoked the question of how many other players were sat in the lower leagues with the potential to play on a much bigger stage, only to go undiscovered. Had Vardy not stuck to his task at Stocksbridge, there is a good chance he and his sensational story would have been lost to football.

It is a question that Vardy has tried to answer himself with the V9 Academy, setting it up with his agent, with the intention of getting professional contracts for non-league players. While none have yet enjoyed the same success that Vardy has enjoyed, there have been a number of graduates who have been able to rise far above their previous level.

It shows that some professional academies give up on players far too early. For any young footballer struggling to make a name for themselves, Vardy’s story is an inspirational one.

Clearly, Vardy always had faith in his own ability, and confidence is universal that he will join the Premier League’s exclusive ‘100 club’ very soon. It is a remarkable story, and a rise to the top which would be deemed unrealistic if it was written in a book. Vardy’s rise was real and miraculous; he lived the dream of every aspiring footballer in the country, and has given hope to anyone dreaming of a professional contract and an England cap.

He may never lift the Champions League or any international trophy, but if being a beacon of hope for non-league talents is not a legacy, nothing is.