Joining us from Norwich on the 21st December 1995 Martin O'Neill went from villain to Hero as Steve Claridge's late goal in the Play Off Final against Crystal Palace took us to the Premier League. 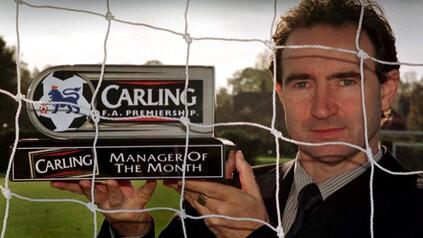 LCFC Club Historian John Hutchinson looks back at one of the most successful and popular figures to hold the post of Club Manager, Martin O'Neill.

O’Neill’s four-and-a-half seasons as manager at City won him an honoured place in the Club’s history.

Born in Kilrea in Northern Ireland, Martin had a background in Gaelic football. He also played soccer at youth level before joining Distillery in 1971, with whom he won the Irish Cup, scoring twice in the final.

Between 1981 and 1984, Martin played top flight football for Norwich City, Manchester City and Notts County. He also won 64 caps for Northern Ireland between 1971 and 1984, captaining the side at the World Cup finals in Spain in 1982.

After a knee injury forced his retirement in 1985, he managed Grantham Town and Shepshed Charterhouse before moving to Wycombe Wanderers in 1990.
In addition to winning the FA Trophy in 1991 and 1993, Martin led the Chairboys into the Football League in 1993, into the third tier via the Play-Offs in 1994, and only just missed out on promotion to the second tier in 1995.

This success led to his appointment as Norwich City’s manager in June 1995, but following his resignation in December 1995, on the day his side were due to play manager-less Leicester City, he became the new manager at Filbert Street.

O’Neill won only three of his first 16 games, a sequence which culminated in an angry crowd demonstration after a home defeat to Sheffield United.
However, aided by new signings Steve Claridge, Neil Lennon, Julian Watts and Muzzy Izzet, initially on loan, the team then won six of their last eight games and sneaked into the Play-Offs.

These seasons saw four consecutive top half Premier League finishes, three League Cup finals, two of which ended with wins and two qualifications for the UEFA Cup.
Off the field, the Club was listed on the Stock Exchange, there were board room tensions, attempts by Everton and Leeds United to appoint O’Neill as their manager and plans for a new stadium on Bede Island.
​
In June 2000, O’Neill left to manage Celtic, where he won seven domestic trophies in five years and reached the UEFA Cup final. He later managed Aston Villa, Sunderland and the Republic of Ireland, before taking the post at Sky Bet Championship side Nottingham Forest in January 2019.
LCFC.COM

1971 Makes international debut as a substitute against the Soviet Union. Joins Nottingham Forest from Distillery in October.
1978 Member of Forest's league and League Cup double-winning side.
1979 Wins a second League Cup winner's medal.
1980 Wins European Cup with Forest when they beat Hamburg 1-0 in Madrid.
1981 After 285 league appearances for Forest, and 48 goals, joins Norwich in February for the first of two spells as a player at Carrow Road. After 11 league appearances and one goal transfers to Manchester City.
1982 Returns to Norwich in January after playing 13 league games for City. Makes 55 league appearances, scoring 11 goals.
1983 Joins Notts County in August, making 64 league appearances with five goals.
1984 Wins last of 64 caps in 2-1 win over Finland.
​(courtesy of The Guardian)

1990 Appointed manager of non-league Wycombe after spells with Stamford and Shepshed Charterhouse.
1991 Guides Wycombe to victory in the FA Trophy.
1993 Wycombe win GM Vauxhall Conference, securing promotion to the Football League. Also win FA Trophy again.
1994 Leads Wycombe to promotion from Division Three at the first attempt.
1995 Becomes manager of Norwich in June. Resigns on 17 December after a series of clashes with chairman Robert Chase over money for team-building. Appointed manager of Leicester on 21 December.
1996 Leicester beat Crystal Palace 2-1 at Wembley in the First Division play-off final to win promotion back to the Premier League at the first attempt.
1997 Wins Coca-Cola Cup, beating Middlesbrough in a final replay. Guides Leicester to ninth-place finish in the Premiership.
1998 Finishes 10th with the Foxes but O'Neill voices concern over lack of funds.
1999 Leads Leicester to Worthington Cup final, where they are beaten by Tottenham, and to 10th place in the Premiership.
2000 February: Leads Leicester to another Worthington Cup win as they defeat Tranmere 2-1 at Wembley. May: Foxes finish eighth in the Premiership, their highest placing. June: Becomes Celtic manager.
2001 March: Wins first trophy in Scotland with a 3-0 CIS Insurance Cup final victory over Kilmarnock. April: Celtic win Scottish Premier League title. May: Beat Hibernian 3-0 to win Scottish Cup final and complete a domestic treble. August: Celtic book their place in the Champions League group stages by beating Ajax 3-2 on aggregate.
2002 April: Celtic secure the Scottish Premier League title. May: Celtic are beaten in the Scottish Cup final by Rangers.
2003 January: Signs new 12-month rolling contract. March: Celtic beaten 2-1 by Rangers in CIS Cup final. May: Celtic lose 3-2 in extra-time to Porto in the Uefa Cup final in Seville. Celtic lose SPL title to Rangers on thrilling final day.
2004 April: Regains SPL title with six games to spare. May: Earns second double in four years with 3-1 win over Dunfermline in Scottish Cup final. July: Delays arrival in America for pre-season trip to care for his sick wife, Geraldine.
2005 22 May: Celtic lose 2-1 at Motherwell and O'Neill's hopes of a fourth title in five years disappear as Rangers win 1-0 at Hibernian. 25 May: Club announce O'Neill will step down after Scottish Cup final to look after his wife. 28 May: Ends career at Celtic with 1-0 win over Dundee United in Scottish Cup final. 2006 July: Appointed manager of Aston Villa.
2007 May: Villa finish 11th in Premier League.
2008 May: Villa finish sixth.
2009 May: Villa finish sixth again, a run of nine games without a win costing them Champions League place. August: Fails to take Villa into the group stages of the Europa League as Rapid Vienna progress on away goals.
2010 February: Reaches his first final with Villa, in the Carling Cup against Manchester United, but they lose 2-1. 10 April: Villa lose 3-0 to Chelsea in the FA Cup semi-final. May: Villa finish sixth for a third successive year. 9 August: Villa announce O'Neill has resigned as manager with immediate effect.
(courtesy of The Guardian)
2011 December : Joins Sunderland as manager, the team he supported as a boy finishing 13th in his first season. Sacked in March 2013 following defeat to Manchester United and with Sunderland 1 place above the relegation zone.
2013 November: O'Neill is appointed National team manager of The Republic of Ireland managing them for 55 games and qualifying for Euro 2016. Failing to reach these heights again O'Neill parted company with FIA in November 2018 despite having signed two contract extensions.
2019 January: Nottingham Forest came calling for O'Neill but he was unable to replicate his success as a player and rumored player dissatisfaction at outdated training methods saw him sacked as manager after just 19 games in charge.