Always the Bridesmaid, Never the Bride |  A look back at Leicester's FA Cup past.

The FA Cup is the one major domestic title Leicester has never achieved, some may say our bogey tournament?

Leicester City holds the unenviable record of the most FA cup final appearances without ever winning the competition with 4 finals. 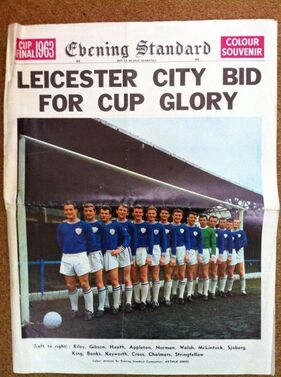 ​The first way back in 1949 against Wolverhampton Wanderers who took a 2-0 lead into the half time break, thanks to a brace from Jesse Pye. Early in the second half Mal Griffiths pulled one back to make it 2-1 before Leicester had an equaliser ruled out for offside. Then on 64 minutes Sammy Smyth made it 3-1 to clinch the trophy.

Then in the 60's we reached a whopping 3 FA Cup finals. First a 2-0 defeat to Tottenham in 1961, followed by a 3-1 loss against Manchester United in 1963. Then in 1969 a single goal by Neil Young gave Manchester City a 1-0 triumph in our last FA Cup final appearance for 51 years and counting!

Other than 4 finals without any silverware, there are plenty of other statistics in this competition that make interesting reading, so let's have a look at a few.

First, let's start all the way back in February 1928 when we hosted Spurs in the 5th round and had a home attendance of 47,298, a record that we've not beaten to this day in any competition.

Next, our biggest FA Cup scorelines. Back in October 1894 we got our biggest win in the competition, smashing Nott's Olympic 13-0. Then in January 1914 a 5-5 tie secured our highest scoring FA Cup draw. 1996 saw Leicester receive their biggest defeat with Manchester City beating us 5-0.

Talking of Manchester City, they're the opponents we've faced the most in the tournament with 15 meetings between the Two sides over the years. Between 1985 and 1991 came the Foxes worst FA Cup run, losing an eye watering 7 consecutive FA Cup matches.

​Let's finish off with goals and appearances. Arthur Chandler and Arthur Rowley jointly lead the scoring charts with 14 FA Cup goals each, while maybe surprisingly Vardy has struggled in the competition for Leicester, bagging just two goals in twelve appearances. Taking the top spot for number of FA Cup appearances is Graham Cross, playing in 59 matches between 1963 and 1975, including a staggering 52 consecutive FA Cup games.

On the 7th August, 1971 something took place that never really should have - but it did, and it involved Leicester City.

Charity Shields are normally contested by the winner of the league title playing the winner of the F.A Cup and Leicester City were neither as they was not even in the top Division, Division 1 as was then,  but instead they werev in Division 2, so how did this all come about?

Well, are you sitting comfortably? Then I will begin....
In 1971 Arsenal were the Division 1 title winners, so they were automatically placed to fill one spot on the Charity Shield bill, but Arsenal was also the winners of the F.A Cup, managing to do the double, so Liverpool being the runners up in the F.A Cup were invited to be the other team to contest the Shield. But to make matters worse for Arsenal they would be in Europe playing 2 friendly games away to Benfica (home and away) and on the day the Charity Shield was to take place had a fixture in place to play against Feyenoord in Rotterdam and decided to pull out of the Charity Shield.

So with the Division 1 Champions and FA Cup-winners deciding to pull out, who would get the honor of playing in the Charity Shield against F.A Cup runners up Liverpool? Leeds who were runners up to Arsenal in the League, Tottenham  who were the League Cup winners & Chelsea who were the Cup-Winners’ Cup holders were all considered but in the end, they decided to choose Leicester City, why?

Well they had just won the Division 2 title and it seemed the best option at the time. Chelsea were keen to take part but were overlooked, Tottenham were unavailable as they were on tour in Scotland & Leeds probably would not have been allowed to anyway and plus they were upgrading their ground so hosting would have been a problem.

And so it was, not only was Leicester City chosen to play in the 1971 Charity Shield against Liverpool, but it was also going to be held at Filbert Street as Anfield was unavailable because of ground redevelopment.

So on a beautiful day on the 7th August 1971, 25,104 fans turned up to see what would be City's first game against a top flight team since winning the Division 2 title as well as to see how then, new manager, Jimmy Bloomfield would fare with Frank O’Farrell who had masterminded their successful promotion, tempted away by Manchester United. And what a day it was to be for Leicester City. Life long City fan & Leicester City right-back Steve Whitworth  was the only scorer of the game as City won the Charity Shield 1-0.

That turned out to be Whitworth's first and only goal for City in a 8 year and 350 games career.

The top national papers headlines were encouraging too with the Guardian quoting "Already at home", while Brian Moore of the Times newspaper wrote, “suggests more a coming season of achievement than one of mere survival”. This was  a City side that was playing a Liverpool team which include top players such as Clemence, Steve Heighway, John Toshack, Emlyn Hughes and Ian Callaghan to name but a few.  The performance prompted the Leicester Mercury to write  “might have scored four had it not been for the fine goalkeeping of Clemence”.

Man Of The Match went to the Foxes new signing from Arsenal, midfielder Jon Sammels with him being quoted as “the main driving force” behind Leicester’s win.
Leicester were at the time,  only the 2nd club to win the shield who having never won the league or F.A Cup, the other being Brighton in 1910,

The shield was presented not on the pitch as was custom at the time,  but below one of the stands due to fans invading the pitch when City were presented with the Division 2 League title cup earlier that year. City's only previous major honour up to that point was the League Cup in 1964, a cup they would win again in 1997 and 2000, They would also go on to contest  the Charity Shield again for a second time when winning the Premier League in 2015/16 and playing F.A Cup winners Manchester United losing 2-1 to a 83rd minute Zlatan Ibrahimović winner after Jamie Vardy had equalised for the Foxes.

As for Arsenal, they lost the friendly in Rotterdam 1-0, and the Times reported that the “60,000 crowds were left disappointed”.

​12 May 2013. Remember it? Were you there?
​
That was the day that the infamous  Watford - Leicester play-off madness took place

Let me set the scene. It's stoppage time in the 2012/13 play-off semi-final second leg and the score is 2-1 to Watford, 2-2 on aggregate, and the game is heading into extra time.

Anthony Knockaert wins a penalty which Manuel Almunia saved (twice), after which Cassetti hooked the ball clear up the pitch and Watford countered...Twenty seconds after Anthony Knockaert missed the penalty Deeney netted the winner!

For me, THIS is when the owners almost got a taste of the Premiership and did everything in their power to make sure no mistakes would be made again. The following campaign 2013/14 City stormed and won the Championship with a record 102 points, and since promotion to the Premier League we have never looked back, only growing in strength.