Sergio Aguero's stoppage-time winner against QPR was his 23rd goal of the seasonIt is one of those moments where everyone remembers where they were when it happened.

Mancini's Manchester City team side had been fantastic throughout the campaign but goals from Djibril Cisse and Jamie Mackie saw them 2-1 down at home to QPR on the final day of the 2011-12 season, needing all three points to seal their first Premier League title.

The visitors then had Joey Barton sent off for kicking out at Sergio Aguero. The rest I'm sure you know...
​
After Edin Dzeko had headed City level in the second of five minutes of stoppage time, up stepped Aguero to send Etihad Stadium wild and break the hearts of local rivals Manchester United, who thought their victory at Sunderland had won them the title.

After a 3-0 defeat in the semi-final first leg in Barcelona, Liverpool manager Jurgen Klopp questioned whether his side could play much better.

Fast forward six days, and two goals apiece from Divock Origi and Georginio Wijnaldum saw the Reds stun the Spanish giants and reach their ninth European Cup final.
​
Origi then netted late against Tottenham Hotspur in the final in Madrid, sealing a 2-0 victory and the club's sixth European crown.

Steven Gerrard's slip came at a crucial moment as Liverpool chased their first league title since 1990
You've got to feel for Steven Gerrard, haven't you?

He is one of the greatest Premier League players but his slip against Chelsea was seen by many as pivotal in preventing Liverpool from winning their first domestic title since 1990 in the 2013-14 season.

With the Reds on an 11-game winning run and top of the table, Gerrard slipped attempting to control a pass, allowing Demba Ba to run through and slot past Simon Mignolet in front of the Kop.
​
Willian scored a second late on as control of the Premier League title race fell out of the hands of Brendan Rodgers' side. Manchester City never looked back.
Perhaps the most ironic thing about the whole incident was Gerrard's impassioned "we don't let this slip" speech after the previous home match against City.

When referee Mark Geiger blew his whistle for the end of extra time, every Three Lions fan must have started thinking about having to take the flags down from their windows.

But how wrong they were.
​
Thanks to Jordan Pickford's strong left hand and Eric Dier's right foot, England won their first World Cup shootout at the fourth time of asking to set up a quarter-final against Sweden. 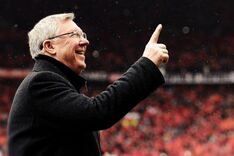 Ferguson says emotional farewell - The greatest manager of all time?

Sir Alex Ferguson's last game as Manchester United manager at Old Trafford ended with an emotional farewell speech - and there was hardly a dry eye in the house.

During his 26-year tenure at Old Trafford, the Scot won 38 trophies.
​
And it was only right he signed off with another Premier League winners' medal, as United lifted the trophy after that final home match against Swansea in May 2013 - a game fittingly won by a Rio Ferdinand goal in 'Fergie time'.

Scoring an overhead kick against anyone is the stuff of dreams.

So imagine the feeling if you do it against your local rivals when game is deadlocked at 1-1 with just over 10 minutes to go.
​
It is little wonder Wayne Rooney has since described the February 2011 strike as his "most important Manchester United goal"

Lucy Bronze's looping header helped England beat Canada 2-1 in the quarter-finalsWhen England beat Germany for the first time in 31 years to finish third at the 2015 Women's World Cup, the celebrations left no-one in any doubt about the significance of the achievement.

Women's football has been on the rise this decade - just in the past three months 77,000 people watched the Lionesses' friendly against Germany at Wembley and a crowd of 30,000 saw the Women's Super League match between Manchester City and Manchester United.
​
Many believe England getting to the Women's World Cup semi-finals for the first time in 2015 has played a significant role.

Over 24 hours before the Manchester derby at Old Trafford in October 2011, the news broke that the Italian striker had been setting off fireworks in his bathroom. Completely normal, right?

After giving Manchester City the lead, Balotelli revealed a T-shirt bearing the phrase: "Why always me?" Roberto Mancini's side, who went on to win the title that season, then capitalised on Jonny Evans' red card to run in five second-half goals and condemn United to their heaviest Premier League defeat.
​
Why always you, Mario? Why always you?

Luis Suarez was given a 10-game ban for the bite on Chelsea's Branislav Ivanovic Louis Suarez is a hard man to keep off the back pages.

Often it was for his sensational match-winning performances on the pitch - but controversy seemed to follow the Uruguayan around.

After being given an eight-game ban for racially abusing Patrice Evra in 2011, the striker managed to generate more headlines by biting Chelsea defender Branislav Ivanovic during a Premier League game at Anfield in April 2013.
​
Unsurprisingly a 10-match ban followed, but it was one of those moments when everyone texts their mates asking: "Have you seen this?"

At the beginning of the 2015-16 season, Leicester City were rated as 5,000-1 to win the Premier League title. As they pulled off one of the biggest shocks in sporting history, BBC Radio Leicester's Ian Stringer was there every step of the way.

This was the year our city was more than just crisps.

It was my idea to go to Stamford Bridge on Monday, 2 May 2016. I'd given it the big sell to BBC Radio Leicester management, without even knowing whether I'd need to go. Cover every base just in case Leicester got a point at Manchester United the previous day, meaning they would win the title if Tottenham failed to beat Chelsea.

I went for a walk at 7am on that Monday morning with my two-month-old son. He was strapped to my chest, allowing me to contemplate my options. Stay in Leicester for an improbable party - Spurs would surely beat mid-table Chelsea - or go for the small chance the stars line up and Leicester City are crowned Premier League champions?

Oliver was born at Leicester Royal Infirmary just weeks before this incredible day. Such is the geography of our city, the bathing room has a view of the King Power Stadium. I held him and I swear to you, I remember saying through a teary eye: "One day, kid, I'll tell you a football story you'll never have thought was possible." We all knew in February that the Foxes would win the league.

Even now, people in Leicester still say "when did you know?" The question is a simple one. In a season that provided one of the most incredible sporting stories ever, when did you know it was done?

It's easy to talk about now, but imagine being the guy who had money on them to win it at 5,000-1 and being offered the cash-outs he was.

For me, it was after the third of their three league defeats, away to Arsenal on 14 February, via Danny Welbeck's 90th-minute winner. From that day, I got the sense that the players wouldn't let it happen again.

They had a trip to Copenhagen planned after that game, in order to get some downtime - dressed as Teenage Mutant Hero Turtles, of course. They were concerned after the loss that manager Claudio Ranieri wouldn't let them go.

The Italian was too smart for that. He let them go, they bonded, had a few orange juices and came back the strongest and most determined group I've witnessed. They would protect their 18-yard box like Michelangelo did his pepperoni pizza.

That loss at Arsenal was sandwiched between other moments in an incredible February when the penny was starting to drop. Riyad Mahrez making it three in the 48th minute away to Manchester City. Jamie Vardy's sensational volley against Liverpool, or Leo Ulloa's winner against Norwich that caused a mini-earthquake. Take your pick.

That night at the Bridge, the Chelsea fans were singing Ranieri's name. "Do it for Claudio" one screamed in the stands next to me. I heard him and it made my nose tickle. I thought of Oliver, my little boy who was going to be forced to support his local team. It's how it works in cities like ours, to stop the youth being lost to the 'big clubs'. Despite being 2-0 up at half-time, Spurs were nervous, as they had been all night. Pre-match, Tottenham manager Mauricio Pochettino was like an expectant father, pacing the corridors. This time, his waiting room was a small technical area in a west London football stadium, where no visitors were allowed. He was alone.

Back in Leicester, the entire city was a Champagne bottle, the cork suspended in that moment before it flies out and whacks the ceiling. Would tonight be the night it goes 'pop'?
​
So I'm there, in the perfect commentary position at the Bridge. I can hear Pochettino screaming instructions at his players with a fearful tone.

When Chelsea got one back, he started to lose his head. On came Eden Hazard, who had been having a tough season. Only in the previous week had he scored his first league goals of the campaign. Now he looked like Leicester's hero, drifting into positions that damaged Spurs.

I had a microphone pressed against my top lip, headphones clasped around my ears and a blue and white scarf on the bench in front of me. The press box was packed, not a seat to be had. Yes, all the other broadcasters and written journalists can hear you when you go big for a goal. Who cares? Not me.

It felt strange knowing we had a seven-second jump on the TV pictures, especially when the radio show itself was coming from a Leicester pub that had 700 people inside. We were offering the best and worst spoiler in sport history. ​

Our presenter at the time, Jason Bourne, was anchoring the coverage with the noises of hopeful Foxes and former pros in the background. He would throw to me at the Bridge when appropriate, so when Chelsea scored their first goal, his celebrations gave the cue for all eyes to move to the TV screens.

I was in full flight, calling every millimetre. The tone of my voice had upped, as had the volume. Heart calm, head cool. No emotion, none, call what you see. I was right behind Hazard's right foot and, for that split second before it hit the top corner, I saw Oliver, my little boy, a Leicester lad whose club was about to become the talk of the town, Midlands, country and planet.

"Edge of the box, into the box, right-footed shot. It's in! Chelsea have got it, Eden Hazard has scored the goal here at Stamford Bridge that could, it just could, put a full stop to the most incredible sport story you have ever read. They might have done it." 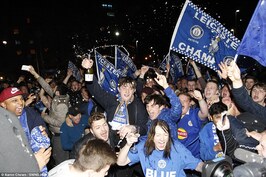 I went straight from London to the King Power after calling my dad, live on air. There were tears cleaning the London dust off my shoes.

There were about 5,000 Foxes supporters celebrating at the ground until 1am that night. I was one of them, permitted to be a fan again, which isn't really allowed in our job.

We sang and hugged all night, I was back there for a beautiful sunrise the following day to report to the world. There were broadcasters from France, Japan, the USA. It was like a royal wedding for us.

Little old Leicester, eh?  Our city has never been the same and never will be.