Which NFL team to support based on your Premier League club 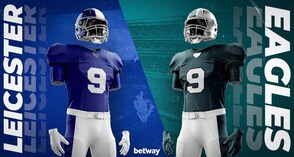 Leicester City – the club that gave hope to minnows around the world!

Remember the headlines? …..
02 May 2016, can you remember where you were and what you were doing? I can. For me, as a Leicester City fan its one of those dates I will always remember.

I can remember where I was and what I was doing when I saw Tommy Cooper Die on stage, watched the news that Elvis Presley had died and waking up to the same news about Princess Diana. For once though, it is nice to have happy memories.

So for me I was slowly getting drunk as Chelsea were 2-0 down to Tottenham unaware of the turnaround in the match and the fact that I would have to go onto a National Sports Radio station less than 5 minutes after the final whistle. It had been the most amazing season in my Leicester City supporting life.

Better than any promotion better than and Cup win. We had beaten the biggest clubs in English football to the biggest prize – The English Premier League Title, something to date that even two of the so called big six, Liverpool and Tottenham, have failed to do.

We are still referred to on many occasion as Leicester City, past Premier League winners, and yes it does put a smile on my face every time I hear it.

Much has been written about the how and why we did it, what sticks in my mind is the warmth as LCFC fan you got just, in my case, walking round town in my lunch on the south coast resort where I work in my Leicester jacket/top.

Everyone wanted to stop and talk. Everyone knew of Jamie Vardy and Riyad Mahrez, even those that didn’t follow football, Since then we have failed to follow that win up with a good season.

Underachievers even getting the tag of the lowest position in the league attained after winning it, But things may just be about to change with Brendan Rodgers and the current skillful young team of players he is molding.

What legacy did Leicester winning the title leave? Well for LCFC as a club the foundations to build a team that could seriously challenge season in season out for a top 6 place and European football. Leicester City had become a household name not just in the UK but around the world, my interviews for news outlets in Germany, Canada, Australia, New Zealand and The USA are testament to that.

Suddenly all the ‘David’ teams around the world felt they could tackle the ‘Goliath’s’ and win. What Leicester City’s Premier league Title win left for the world was hope.

Look at American Football for instance. At 50/1 outsiders not quite the 5000/1 odds of Leicester to win the title (but I don’t think those odds will ever be offered by bookies ever again – anywhere) the Philadelphia Eagles went onto shock America beating New England Patriots 44-31 in the 2017/18 Superbowl.

And there’s another legacy, a bond between teams that previously had no connection's whatsoever. For me The Philadelphia Eagles are a team I now look for when checking the results, a little bit of Leicester as well as Rocky in America.