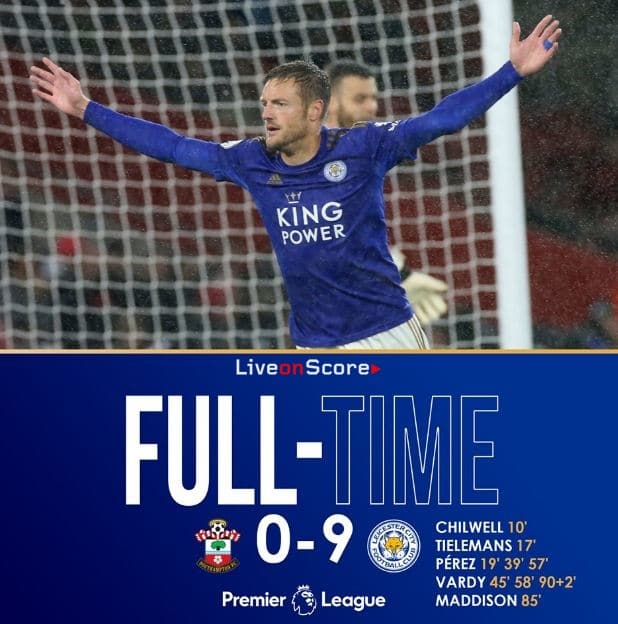 A game that I thought we could win, a game I hoped we would win, turned into a game we did win, and with clinically perfection we did win.

My first game I’ve not gone to this season and if you cannot make a game, today’s game is and was the one not to miss.
With city keeping an unchanged side and formation from the Burnley game, City from the off were on the front foot and after only 10 minutes city took an early lead through chillwell, and from that goal VAR went back to a challenge from Bertrand on Perez and an obvious VAR red.

Over the years when teams against us have gone down to 10 we have struggled, but like the Newcastle home game and tonight, the tide has turned on that point, well until the next time I guess! City were on the up, and it was soon 2 with Tielmans slotting home from 10 yards.

With city now looking in control, but never was I confident, ( that’s me, half full ), but when no 3 going in from Perez, I was becoming quietly optimistic about 3 points, but it’s like golf, you can have 17 good holes and the last hole comes in and bites you and you end up with a 5,6,7 or 8 .

The game was so one sided and Southampton looked really poor and if they carry on with these displays, the trap door may this season be open. With half time approaching city soon rattled in 4 and 5 from Perez and Vardy respectfully.

So having my dad round and reminiscing about other memorable games and scores, tonight was again one to remember in the memoirs of the 48 years of watching our team.

So with the second half under way, I wondered how we would go about it, would we be content, or really batter an already demoralised Southampton team, well it was the latter, and another 4 goals,from Perez, Vardy 2 and Maddison, the record away win was confirmed and no body in there right mind would have bet on that, and if there is one person that did, well with your winnings, happy retirement, as the odds on that must have been more than the 5,000 / 1 odds.

So the table looks brilliant and nicely sitting in second at the moment with a seriously good goal difference. So Burton away on Tuesday that I’m going to, and a game that Rogers will give the upmost respect to, by that, a strong team will be put out.
​
How on earth can I pick out a MOM tonight, so I’m giving it to all the players tonight, and a special and well deserved well done to all you City fans making the trip down to the south coast on a awful evening for weather ( have a safe journey home all ).
The only way I can sum tonight up, is unbelievable!!!!!

By the time Jamie Vardy stepped up from 12 yards to add Leicester City’s ninth and put the final nail in Southampton’s coffin, the pocket of delirious travelling supporters, well on their way to revelling in a giddying record-breaking away win, were sarcastically singing for the goalkeeper Kasper Schmeichel to take aim from the penalty spot. The only other time a team won by such a margin in the Premier League 24 years ago, another Schmeichel was on the winning side for Manchester United.

Leicester fans toasted Vardy’s hat-trick by feverishly waving white scarves bearing the name of their late owner Vichai Srivaddhanaprabha, whose death was a year ago on Sunday, but Saints had long since raised the white flag on a deeply sobering evening. For Leicester, passage to the record books came after breezing to the biggest victory by an away team in the 131-year history of the English top flight and to second in the table.

​This victory takes them to 20 points from 10 games, one more than their total at this stage when they went on to win the league against all odds.

For Southampton, who had Ryan Bertrand sent off 12 minutes into this non-event, this was an ordeal from start to finish. The visitors shot Saints to pieces, with Ayoze Pérez also helping himself to a hat-trick to celebrate his first goals in a Leicester shirt as Brendan Rodgers’s boisterous side cantered to an embarrassing rout that laid bare his side’s top-six credentials while exposing familiar flaws in the Southampton defence. By the time James Maddison curled a sweet free-kick beyond Angus Gunn for Leicester’s eighth, Ben Chilwell and Youri Tielemans, both of whom were irresistible throughout, had inflicted lasting damage. As Rodgers said, the relentless Harvey Barnes was unfortunate not to get on the scoresheet.
​
By the time the fourth official Andy Madley signalled for two minutes of second-half stoppage-time, thousands of Southampton supporters had headed for the exits after enduring nothing short of an ordeal. With 18 minutes and 34 seconds on the clock here, home fans filtered out of St Mary’s safe in the knowledge the visitors were cantering to victory. The retrospective red card awarded to Bertrand, whose studs caught Pérez on the shin, did not help matters but, in truth, Southampton were playing second fiddle from the off, long before the brilliant Chilwell opened the scoring from close range. Rodgers insisted his purring side can improve and, on this evidence, that is a frightening assertion. Leicester ran riot and at times the suffering they inflicted on Southampton felt unfair.

​The gulf between the sides was alarming, reminiscent of a charity fundraiser whereby the scoreline is secondary. But, for Southampton, this capitulation does not only matter but it is also deeply concerning given Ralph Hasenhüttl’s side have conceded 19 goals in their past five matches and, unsurprisingly, have the worst home record in the division. Up next? The champions. Away. Twice: first on Tuesday in the Carabao Cup and then next Saturday in the league. “Manchester City, we’re coming for you,” came the ironic chant from crestfallen supporters before the final whistle.

Hasenhüttl acknowledged his side must solve their wretched home form – they have won 15 of their past 62 matches at St Mary’s – but by the time they were put out of their misery here, there was plenty more for the Austrian, forlorn in the dugout, to ponder.

​To say Southampton’s resistance was feeble would be pushing it. Their submission was meek. Tielemans drilled in Leicester’s second after Yan Valery inadvertently prodded the ball into his path following a trademark marauding run by Chilwell. Ninety seconds later, Leicester were wheeling away in celebration once more, with Tielemans again instrumental. Ricardo Pereira kick-started the move, which was finished by Pérez after a neat give-and-go with Tielemans.

​Things went from bad to worse when Pérez fired home unmarked at the back post, ghosting in behind Valery. Then Vardy got in on the act, bamboozling Maya Yoshida after Chilwell’s cross deflected into his path. The visitors, and Barnes especially, were toying with a brittle defence. Southampton kept a clean sheet for the first 12 minutes of the second half but then Gunn’s net was bulging once more.

Pérez completed his hat-trick as he established a gaping hole between Kevin Danso and Yoshida and duly chested a flighted Barnes ball down before applying a thumping finish. Two minutes later, Gunn was fishing the ball out of his net again, with Vardy the culprit. The away end craved eight but got nine, by which point Southampton were broken.
​The Guardian