As a manager, Eriksson won eighteen trophies with a variety of league clubs in Sweden, Portugal and Italy, between 1979 and 2000, and became the first manager to win league-and-cup doubles in three countries.
​
He later managed the national teams of England, Mexico, Philippines and the Ivory Coast, as well as two clubs in England. Eriksson has worked in ten countries: Sweden, Portugal, Italy, England, Mexico, Ivory Coast, Thailand, United Arab Emirates, China and the Philippines. 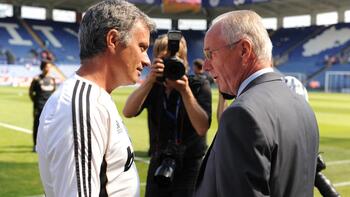 Sven talking to then, Real Madrid manager Jose Mourinho, ahead of the showpiece pre-season friendly.
This was a particularly notable appointment considering that City were standing in 22nd-place in the Championship table as Eriksson remained one of the most recognisable figures in world football.

Sven's career as a player was modest, but his managerial achievements were impressive. It began with him winning the Swedish League, Swedish Cup and UEFA Cup with IFK Göteborg.

At Benfica, meanwhile, across two spells at the club, Eriksson lifted the Portuguese title three times, together with the Portuguese Cup and Super Cup. He also led the club to a European Cup Final and a UEFA Cup Final.

As Roma’s manager, on the other hand, Sven won the Italian Cup.
​Following a spell at Fiorentina, he moved to Sampdoria, where he tasted success in the Italian Cup once more.

Later on, he switched to Lazio, winning the Serie A title, the Italian Cup and the Italian Super Cup twice, the European Cup Winners' Cup and the UEFA Super Cup.
In 2001, he became the England national team manager, qualifying for the 2002 and 2006 FIFA World Cup finals as well as the UEFA European Championship finals in 2004.
Eriksson guided the Three Lions to the quarter-finals on each occasion, losing to Brazil in 2002 and on penalty shootouts to Portugal in 2004 and 2006.

By the time he vacated the England post in 2006, to be replaced by Steve McClaren, Sven had taken the national side from 17th to fifth in the official FIFA World Rankings.

The Foxes had started the season poorly and were sat in the relegation zone of the Championship table, but Eriksson's appointment led to a surge up the standings.
Among others, Sven added Kyle Naughton, Darius Vassell, Sol Bamba, Yakubu, Ben Mee and Patrick van Aanholt to his Leicester City squad. Following a run of seven wins and a draw in the first eight games of 2011, Eriksson's Leicester rose to seventh in the Championship, one point off a Play-Off position.

A subsequent dip in results, though, saw his team finish the season in 10th place. In the close season, a major recruitment drive followed as the Club looked to return to the Premier League.

"The last straw was the 3-0 home defeat by Millwall on Saturday. It was a rather poor performance. They've been inconsistent. The owners have got very very high aspirations, and in the last year since Eriksson joined they've spent over £20m. They're not too impressed with Eriksson's stewardship. They feel he lacks practical experience at this level, despite his eminence at international level." 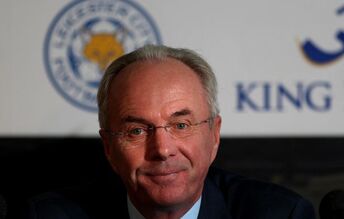 The 63-year-old has overseen an inconsistent start to the season, winning only five of 13 league games after spending heavily in the summer.  First-team coach Derek Fazackerly has also left the club.

A statement on Leicester's website said: "The club and its board of directors would like to thank Sven and Derek for the contribution they have made to Leicester City during their 13 months at King Power Stadium.
"The process of recruiting a new permanent manager will begin in the coming days.
"There will be no further comments from the club or any comment on the recruitment process until an appointment is made."

Martin O'Neill, who successfully managed Leicester from 1995-2000, leading them into the Premier League and to two League Cup successes in 1997 and 2000, has been installed as an early favourite to succeed Eriksson.

Curtis Davies, who played on loan at Leicester last season, told BBC Radio 5 live: "I think a lot of the players who signed in the summer, signed because Sven was the manager. "I'm sure players believed in him. He revived my career and I owe him one."

City were taken over by Thai-based consortium Asia Football Investments in August 2010 and appointed ex-Manchester City manager Eriksson in October. At the time, the club were bottom of the Championship but Eriksson, who was able to recruit the likes of defender Kyle Naughton and striker Yakubu on loan from Tottenham and Everton, led them to a 10th-place finish after winning 17 of 36 matches.

During the summer, the Swede recruited a number of high-profile players, backed by the financial clout of the club's owners. These included Matt Mills from Reading for £5m, fellow defender Sean St Ledger from Preston, striker David Nugent and midfielder Neil Danns on free transfers and goalkeeper Kasper Schmeichel for an undisclosed fee from Leeds.

However, despite being viewed as one of the favourites for promotion Leicester have struggled for form, amassing just 19 points from 13 matches. They have lost three of their seven games at the King Power Stadium this season, the latest being Saturday's 3-0 defeat by struggling Millwall, which was Eriksson's 24th and final loss of his 55-match City reign.

As a result of his pedigree, Eriksson's appointment was seen as a major coup for City. After early managerial success in his native Sweden, Eriksson went on to win trophies with Benfica in Portugal and Roma, Sampdoria and Lazio in Italy.
BBC 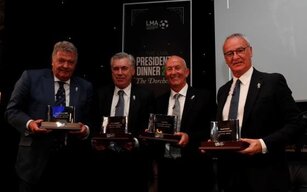 The League Managers Association tonight hosted the LMA President’s Dinner 2017, with England Manager and LMA President Gareth Southgate, at The Dorchester in London.

The event brought together 350 esteemed guests to induct six exceptional managers into the LMA’s Hall of Fame - 1000 Club as well as to raise funds for the LMA's charity In The Game.

LMA members Carlo Ancelotti, Tony Pulis, Claudio Ranieri and John Toshack MBE were formally inducted during the evening, whilst Rafa Benitez and Sven-Göran Eriksson, who were both unable to attend due to football commitments, were inducted in absentia.

Gareth Southgate and LMA Hall of Fame member Sir Alex Ferguson presented the new 1000 Club members with trophies hand-crafted by Thomas Lyte, appointed Goldsmiths and Silversmiths to Her Majesty The Queen.
On the career achievements of the guests of honour, Gareth Southgate said: “It was a privilege to be able to welcome these highly respected managers, their families and friends to the LMA President’s Dinner tonight and recognise their remarkable accomplishments in football.

“The significance of reaching 1000 games in football management at the elite level cannot be understated and it is clear that their dedication to the profession has enabled them all to be successful in many different ways. They are an example for all young managers, demonstrating what can be achieved in the game through hard work and dedication."

Fellow LMA 1000 Club and LMA Hall of Fame member Sir Alex Ferguson said: “Congratulations to Carlo, Rafa, Sven, Tony, Claudio and John on surpassing this extraordinary milestone in football management. They join a select group of 24 managers, some of the most decorated and experienced individuals in the game, in a very special club.

“It takes decades of sacrifice, resilience and talent to build such marvellous careers in the game and each of these managers has experienced every emotion and every challenge that comes with the job, and achieved a great deal.

“I’m delighted to welcome them into the LMA 1000 Club and wish them all further success in their managerial careers.”
LMA