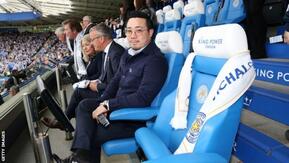 It wasn't until right at the very end, as the last stragglers of the Leicester side were making their way off the field after their 2-1 win against Burnley, that Aiyawatt Srivaddhanaprabha gave himself away.

Up to that point, 34-year-old 'Top', as he is affectionately known, had been a restrained presence in the directors' box.

He shook scores of hands before the game as supporters picked him out and offered their best wishes. There was a punch of the air after Youri Tielemans had scored what turned out to be the winner, and another as the Leicester players celebrated a success that consolidates their place in the top four.

There was even a laugh at a joke offered in the immediate euphoria of success. Then, just for a few seconds, the veneer slipped and Top showed some of the inner emotion it is only natural to feel on days as poignant as this one. Almost without anyone nearby noticing, he put his hands together in prayer and pointed to the sky, as if to say 'this one's for you, dad'.

It barely seems credible almost a year has passed since the helicopter carrying Vichai and four others crashed shortly after take-off, close to a car park by the King Power Stadium, after a Premier League game against West Ham. That was certainly the feeling of some of the fans I spoke to on the 'Walk for Vichai' that left Magazine Square, just over a mile from the stadium, at shortly after 13:15 BST. 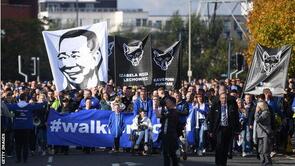 Over the past few weeks, as they arranged with local authorities for road closures and a police presence and stewards to keep everything running smoothly, there was minor concern amongst the fans organising it that their effort would be pointless as not that many people would want to mark the anniversary - which falls on 27 October - by repeating a walk that took place before Leicester's first home game after the crash, fittingly enough against Burnley.

"Last year was a very emotive and reactionary event," said Glenn Murphy, part of the organising committee. "This year we didn't really know what to expect."  They needn't have worried. Nor should there be any thought about next year's, or subsequent years after that. So many people 'Walked for Vichai' it took 10 minutes for them all to leave Magazine Square.

There could not have been a greater cross-section of Leicester's support. Young, old, in wheelchairs or pushchairs. Many carried bunches of flowers to be used when the walk came to its end. Thousands went along the route, along The Gateway, Eastern Boulevard and finally up Raw Dykes Road to the stadium. The sight of local hero Emile Heskey emerging from a car park caused a few to stop and take a photo but most strode on with purpose.

To truly understand why, you probably need to be a local.

Yes, Vichai presided over possibly the most amazing title success English football has ever known. But, unless you come from Leicester, you wouldn't be aware of the significant, unseen donations to local causes. No fuss. No attention. "He was such a humble man," said Murphy. "We are lucky he decided to invest in our football club and our city. Some clubs don't like their owners. We love ours. We have an affinity with the family. We regard them as one of us."
​
Leicester City themselves are waiting for the actual anniversary for their formalities. A memorial garden will be opened a week on Sunday on the actual crash site which, according to Top, will "bring a sense of peace to the scene of the accident". 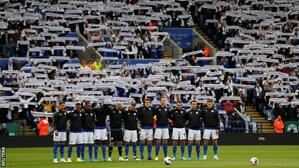 Saturday was limited to a minute's silence that was perfectly observed. There was no sound. No latecomers who had forgotten what was happening. No visiting supporters who didn't feel the need. Instead, apart from the Burnley section in the corner, there was just a wall of white.

Scarves bearing Vichai's name and the phrase 'made the impossible possible' were left on each seat and dutifully held aloft throughout the 60 seconds when there was no noise and then again in the second half, when there was plenty, as Leicester's fans sang their Vichai song, which ends with the line "champions of England, you made us sing that" in recognition of that never-to-be-forgotten season under Claudio Ranieri.

For the rest of the game, those scarves were worn around necks. The sight would have represented an impressive show of solidarity had it been at an England rugby union international. Given it was for a team wearing blue, the whiteness was almost surreal.

In the match programme, manager Brendan Rodgers, who was not at the club when the crash took place, said he was "determined to put in a performance fitting of the occasion". After the victory, Rodgers admitted it had "not been an easy day" but wanted it to be "a celebration" and was delighted his players had shown the characteristics Vichai valued the most: "fight, spirit and win".

Top went a bit further with his pre-game thoughts, thanking the fans "from the bottom of my heart" for the way they reacted to the tragedy. The memorial garden, he said, will "be a permanent reminder to us of the people of Leicester's remarkable display of love and respect during that difficult time".

For now, the memorial garden remains behind a fence, the last bits of work continuing to ensure everything is finished for next Sunday's opening, which Top will attend, along with Rodgers and his players.
​
Instead, the supporters bearing flowers headed to a makeshift shrine at the end of the car park where the crash happened. Underneath a picture of Vichai, the number of bouquets gradually grew. Some fans who laid them were wearing Thailand scarves in further recognition of the man they continue to adore. 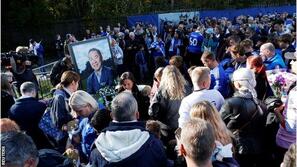 Leicester fan Sarah Bennett was wearing a Vichai t-shirt. By the time she had finished speaking, she also had a tear in her eye.

"He put Leicester on the map," she said. "He is just one of those people who brings the best out of you. He was a brilliant, brilliant man.

"But we can't forget Top in this either. In some senses, he has thrown himself into the club so much that I wonder if he still needs to grieve. But he has pushed on with the new training ground, the expansion of the stadium and the memorial garden.
​
"I am sure what he has managed to do over the last year would have made his dad so proud."
​By Simon Stone BBC Sport